Conveyor belts have been making businesses efficient for more than 100 years. Henry Ford is credited with being the first to successfully use conveyor belts for mass production. Modern conveyors deliver everything from car parts to sushi dishes. While a conveyor belt is simple in principle, a thoughtfully designed system catering to a company’s requirements is essential to productivity. 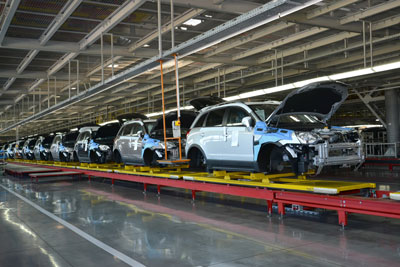 It was 1913 when Ford Motor Company set up conveyor belts to speed the production of automobiles. Conveyor belts made assembly line production possible. Before Ford revolutionized industry with the invention of the modern assembly line, canvas and leather conveyors had been used in coal mining.

Modern systems are essentially the same as Ford’s early concept. The principles of efficiency still apply, but the technology is faster and more automated. The types of industries that use conveyors is diverse. Warehouses, ski slopes and manufacturing assembly lines are a few of the businesses that rely on this type of technology.

Just as in Ford’s day, assembly lines use specialization to speed production. Stations for different tasks are set up along the belt. Early systems relied on human hands to complete the tasks. Many of today’s factories are almost completely automated. Machines, computers and robots complete much of the work.

Automation has given conveyor belt assembly lines more speed and accuracy. Computers and laser systems have taken manufacturing to places early industrialists could only imagine. High-end assembly lines are not only incredibly efficient, they’re versatile by design. Some systems can be quickly revamped to go from manufacturing one product to another. This level of adaptation allows factories to change depending on the demand for parts and products.

Motors power most conveyors, though manual systems are still used for some applications. Snake conveyor belts are used to move items on an incline. Long belts are designed to move large quantities over distances several miles long.

Modern belts are made from durable specialized rubber. Conveyors have to stand up to the conditions in a wide variety of manufacturing environments.

Belts aren’t just for factories. Warehouses rely on conveyor belts to move products. Sophisticated warehouse conveyors can help with sorting by positioning, aligning or even identifying objects on the belt.

Conveyor belts have a distinguished history, and they continue to play an important role in industry. If smooth-running conveyors are essential to your facility, you need an industrial contractor with conveyor installation and repair experience. Storee’s team of experts can help you design, install or repair your conveyor. Contact us today for more information about our services.